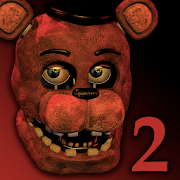 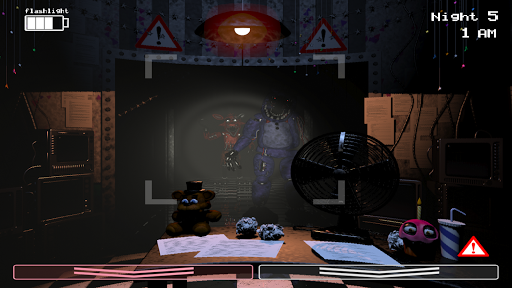 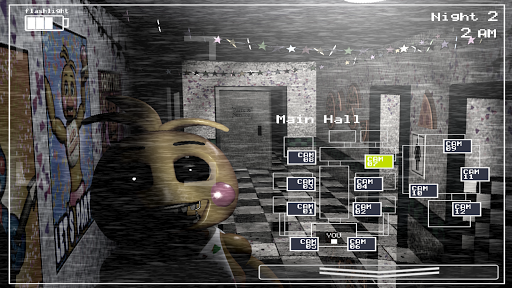 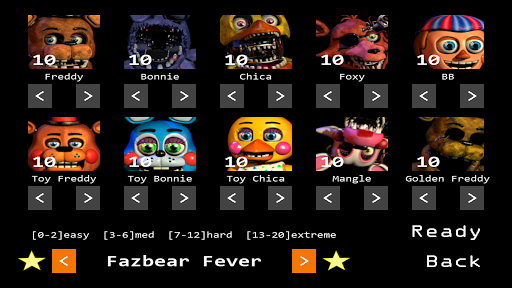 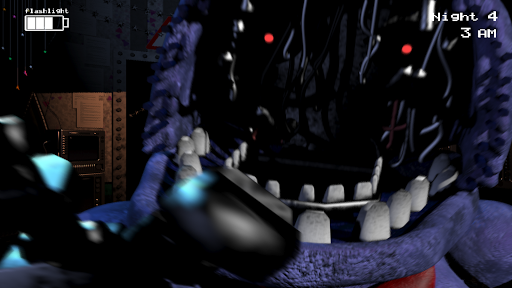 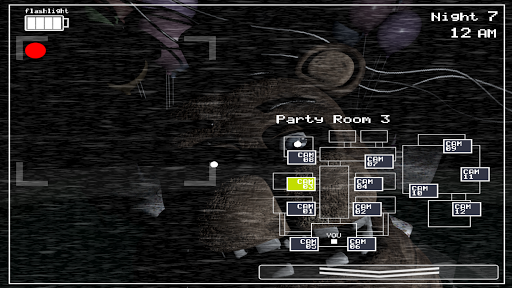 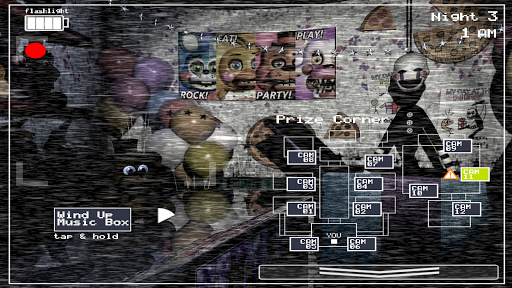 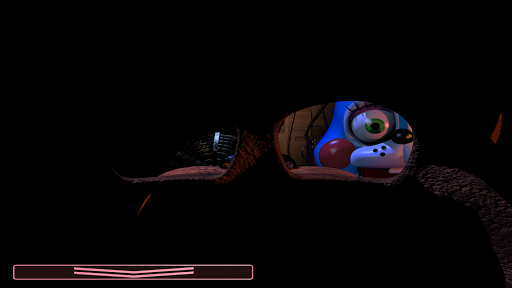 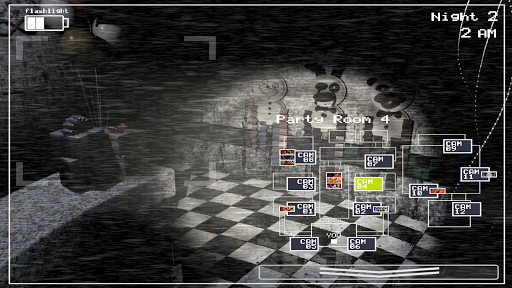 Players will stay in the first-person perspective to look around the guard room, but also with the closed-circuit monitor, with limited power flashlight and button light to observe the whole restaurant. Players also need to regularly watch the CCTV 11 and the accompanying warning signs, and control the music box in the prize pavilion to avoid the puppets from moving out. Each robot puppet has its own unique way of moving, and will go crazy because of the player's control of the CCTV movement, with faster and more intelligent movements later in the story. If they can't cover themselves in time, they will come to kill the player the next time he puts down, or is forced to put down the monitor and mask, and declare the game to end in tragedy.

In the beginning, Freddy is not more active than rabbit and chicken, if you are lucky, Freddy

will not move all night, if he appears, he usually appears in the main entrance of the security room.

Bonnie is generally the first doll to start the activity, he will always disappear after appearing in the cam03 room, holding an electric guitar to the camera pose, and then from cam04 to the right side of the office vent to find us.

Usually the second to attack, and she has two attack routes, is a more difficult to deal with the doll. However, she must first go to the cam10 room every time she attacks, and then choose a route to attack the players.

Defense method: It’s similar to the method of Freddy and Bonnie.

There is an additional music box, we need to wind up the music box in com11, as long as the music box stopped, the clown will appear directly to kill the players. But in the music box when the clockwork is almost finished, the game will send a reminder.

He is also a new robot doll in this generation of the game, as long as he disappeared from the original room, our camera can not see him, only when he appeared in the left vent, the camera will shine to him. The more troublesome thing is that when he is found poking his head out of the left vent, because of his short stature, it is difficult to find out if he has left after we put on the mask. We only rely on the sound to determine.

Attack route: from cam10 room directly appear in the left vent, and then to the office

Defense method: If it appears in the monitoring, wait for him to laugh again or say hello, point to the left pipe lights to see if it appears, then immediately put on the hood.

Mangle was left in cam12's room, mangled and disfigured, with a hideous face. It moves fast and likes to drop on the ceiling.

Defense method: Pay more attention to the pipe, if you find Mangle, put on your hood.

Five Nights at Freddy's 2 ©Copyright by Gamdise Do not Reproduce.   By Rebecca

Five Nights at Freddy's 2 is a PC port of the action-adventure game, the game is mainly based on horror, in the game to create a very good atmosphere. The main character is a pizza store monitoring security, the store in order to attract children and get a lot of teddy bears, in fact, these humanoid dolls are AI robots under the holster, the player has to monitor the interior of the store after midnight, but these robots inexplicably began to move, the silent night became scary, and you have to spend seven nights this way.

The difference of previous one is that the protagonist has to face a pile of discarded toys, they are very worn out, but the mechanical structure under the holster is still normal, they move again in the silent night, it will be more frightening than the previous one, this time the protagonist is in the surveillance room without a door but only the pipe to the outside world, they will crawl through the pipe into the monitoring room. However, this generation is not only more unfavorable factors for the protagonist, because the AI robot under the toy doll using facial recognition system, in a pinch, you can wear a teddy bear hood to hide from the invading toy doll.

It can be said that the game graphics compared to its predecessor basically nothing has changed, at first it will look very simple and mediocre, but careful observation you will find that the game's graphics design is actually very fine, a variety of small details cleverly create a scary atmosphere. Through a variety of clever means, a large number of static pictures combined into a horror scene. From the point of view of the game experience, the picture plays a big role in the horror atmosphere.

There is an octave box on top of the camera in the game, which must be wound up in order to send out music. Once the octave box stops playing music, the dolls will immediately go berserk and tear the players apart, which makes the players have to stay on the surveillance screen every once in a while and cannot focus on holding the position.

All in all, it's a good horror game, not great graphically, but with a decent atmosphere. It can also provide several hours of pleasant and exciting experience, and the mechanics are quite unique and worth playing. However, there are certain requirements for reaction time and operating speed, and it is recommended for fans of horror games who seek excitement.