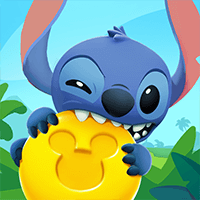 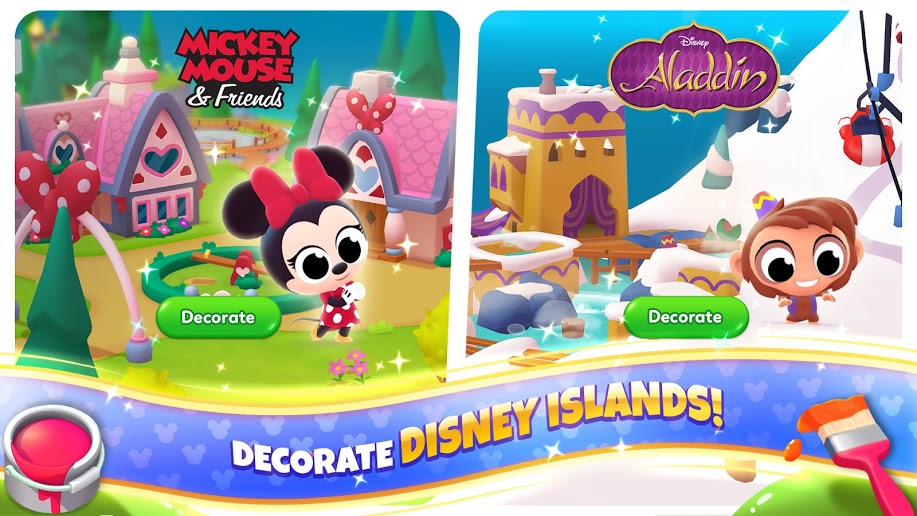 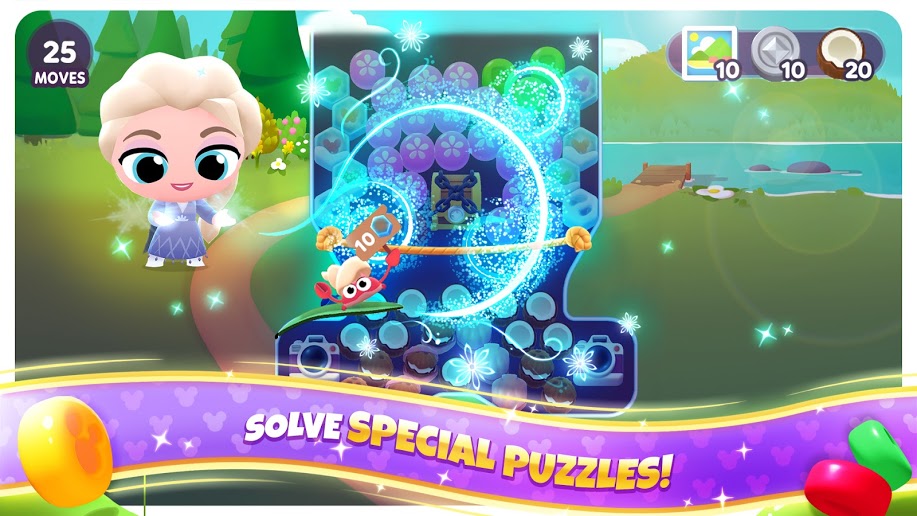 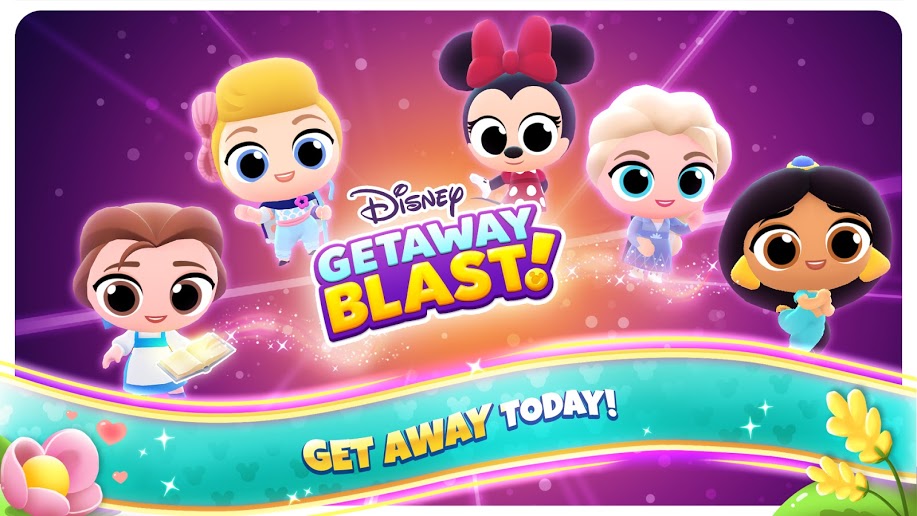 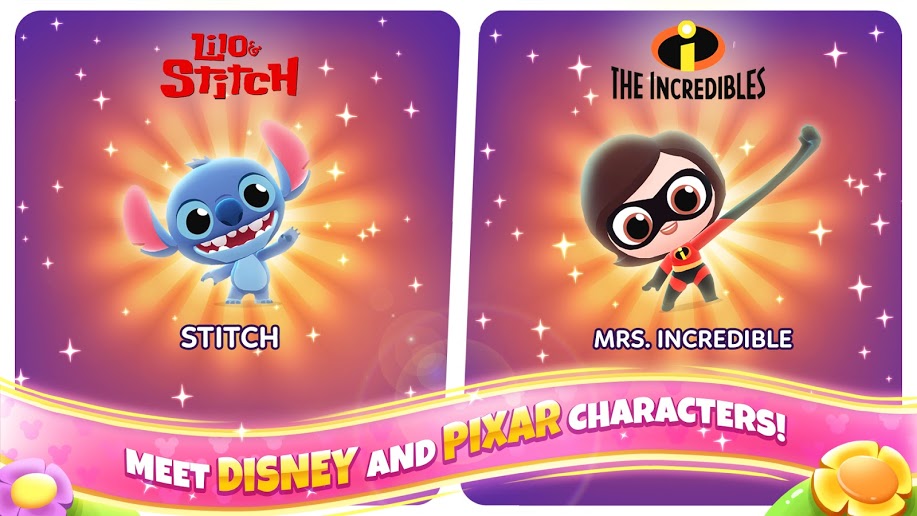 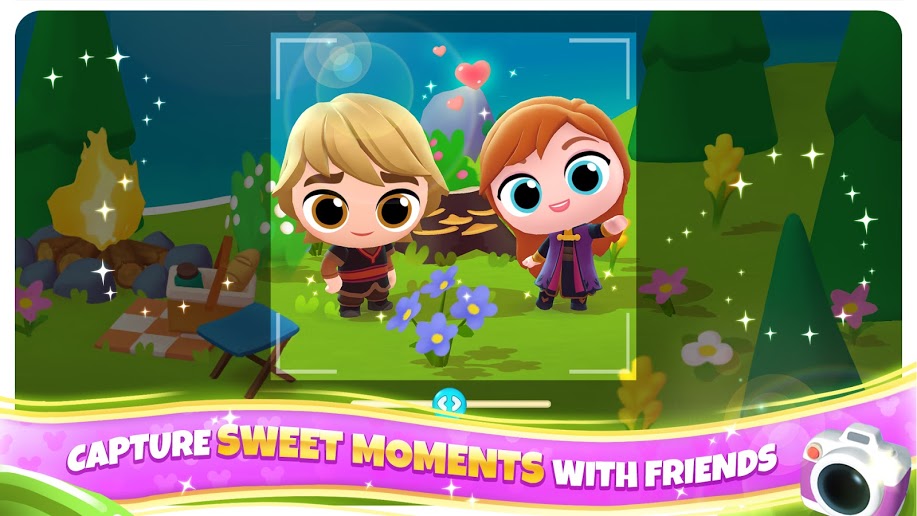 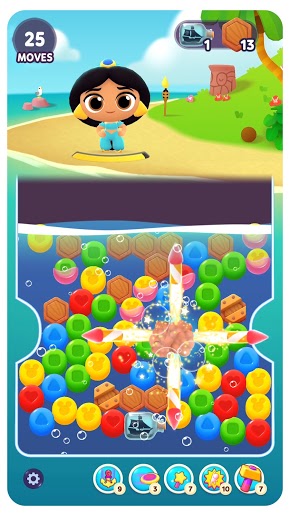 Disney Getaway Blast is a free-to-play puzzle mobile and computer game developed and published by Gameloft. It was officially released on January 30, 2020. It is a match-three game that involves touching (or clicking) on chains of colored bubbles to clear them away, similarly to Angry Birds Dream Blast or other similar game titles.

Embark on a magical quest with Disney and Pixar Princesses, Heroes, and Villains to match and pop bubbles. Solve magical puzzles and have a blast, meet new friends and add them to your character collection.

Stamp your passport and embark on an all-new puzzle-popping adventure unlike any other! Find and collect adorably quirky Disney & Pixar keychain characters in Disney Getaway Blast, who’ve all come to life to restore and rebuild an enchanted vacation paradise.

Go on a tropical getaway, a frozen expedition, an underwater adventure, and more. You can enjoy them all, anytime, anywhere!

The Disney and Pixar characters will help you pop bubbles and blast puzzles on this adventure. As you blast bubbles and progress in your quest, you’ll design the islands in a lovely Disney style.

PUZZLES AND DISNEY ADVENTURES
Match and pop the bubbles in this fun free game to charge the unique skills of the Disney and Pixar characters. You’ll blast away all the puzzles with their unique skills. Add Stitch from Lilo and Stitch, Elsa from Frozen, a Disney Princess like Belle, or a Disney Villain like Maleficent to your collection. The magical Disney adventures await.

DESIGN DISNEY HOMES
These vacation islands could use that Disney touch. Restore the islands and design them in a cute Disney style for the characters in your collection. Collect Disney and Pixar characters like Minnie, Mrs. Incredible, or a Princess like Belle or Jasmine and design their vacation homes for them in this fun adventure.

TAKE PICTURES OF YOUR FAVORITE MEMORIES
Collect Disney and Pixar characters, then take and share a lovely photo. Capture the adventures in a photo and add them to your collection. Have a blast and enjoy the Disney magic and quirky vacay story in this puzzle adventure game.

Disney Getaway Blast is a magical game with cute stories and puzzle bubble fun. Have a blast and vacay away!

Disney Getaway Blast ©Copyright by Gamdise Do not Reproduce. By JoJo

Disney Getaway Blast is a brand new match-3 game that involves touching (or clicking) on chains of colored bubbles to clear them away, similar to Angry Birds Dream Blast or other similar game titles. The controls, like 99% of match-3 games consist of tapping the same colored blocks to get points. There isn’t much else to it and makes it even more so better for every age as it’s easy to play. The most stunning part is the graphics, I must say, the visuals and graphics are really beautiful and eye-catchy.

The lands of Disney Getaway Blast are filled with Disney & Pixar characters from Toy Story, Aladdin, Frozen, Beauty and the Beast, Mickey & Friends, and many more. As you would expect from a Disney game, the graphics are very vibrant, colorful, and cartoon-like. With typical Disney music and sounds, Disney Getaway Blast is joyful, upbeat, and fun. A lot of the time I find myself getting annoyed at the music in match-3 games, but something about this just makes me happy.

Since the first level, the gameplay remains the same throughout the entire game, although the difficulty level rises with each passing stage. All you have to do is match bubbles of the same color until you pop them all and achieve the target given to you to clear that level. Similar to Gardenscapes/Homescapes, you have to collect stars to get through the game. Collect characters and build up the island by matching colors together in the mini levels. Collecting stars take you further in the game and power-ups help you through the match-3 levels.

If you pop up a certain amount of same-colored bubbles together, you would see different power-ups appearing. These can be a rocket or a firecracker or a color beam. All of these do an excellent job to pop up a large number of bubbles together, thus making your task easier. though level goals were the same for any of the instances layout and arrangement of bubbles were different each time. Each level is well designed and has a unique set of challenges. these challenges can be collecting bubbles of a specific color and number, collecting wooden boxes, unlocking a ship on a bottle, breaking coconuts, and so on.

Disney Getaway Blast is a great little easy game to play when you’re short on time but have a few minutes free. After certain levels difficulties rise so much that you would feel frustrated or even want to continue with spending a penny to buy new lives. But if you can avoid this little obstacle, I would recommend this game to you.