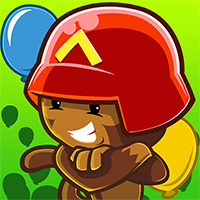 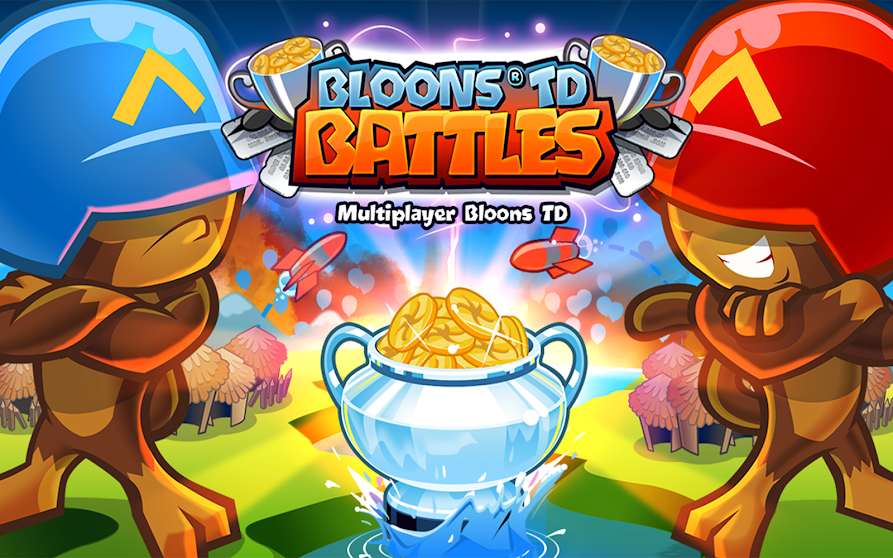 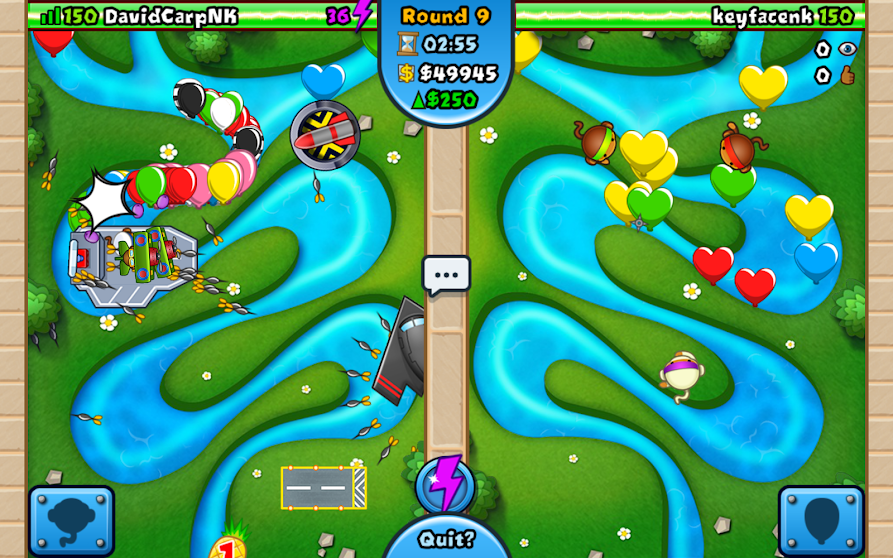 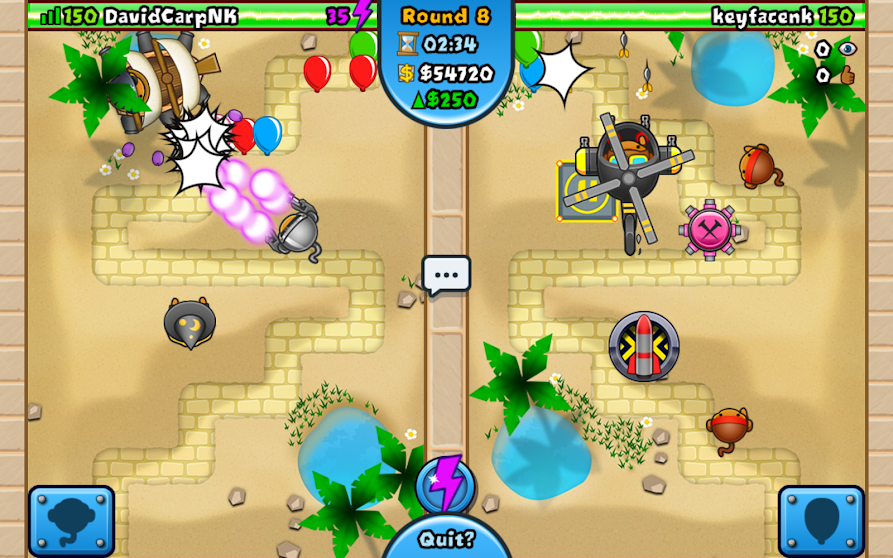 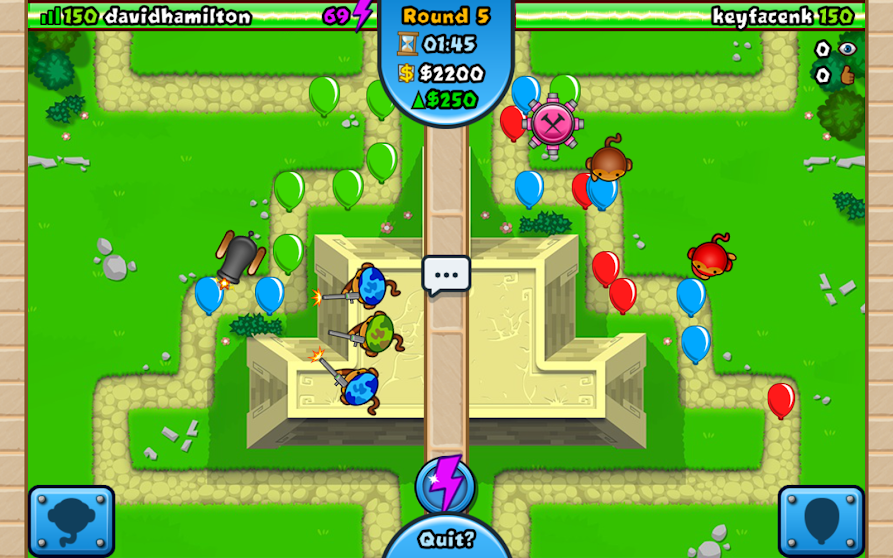 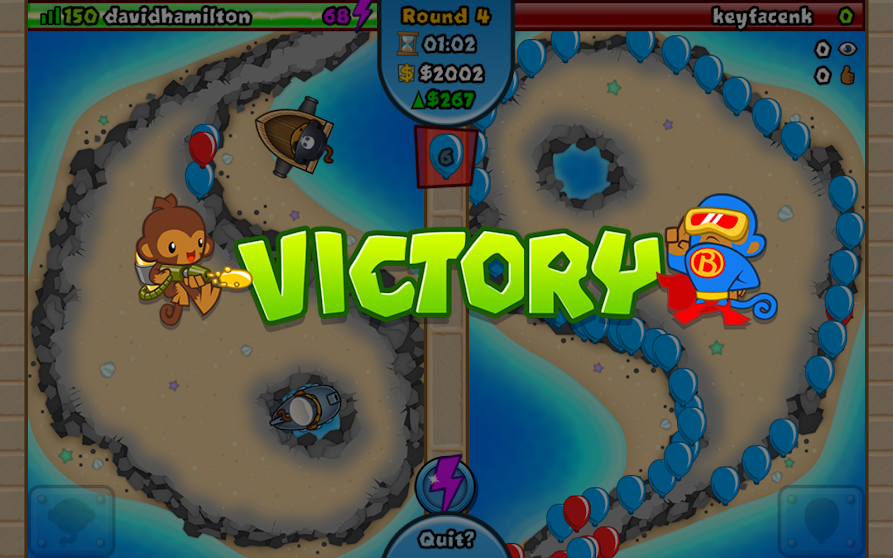 Go head to head with other players in a Bloon-popping battle for victory. From the creators of best-selling Bloons TD 5, this all-new Battles game is specially designed for multiplayer combat, featuring over 20 custom head-to-head tracks, incredible towers and upgrades, all-new attack and defense boosts, and the ability to control bloons directly and send them charging past your opponent's defenses.

If you are new to Bloons tower defense games, don't worry - a helpful tutorial walks you through the game, and matchmaking will help balance the opponents you face. And if you want to battle against your friends, you can easily create and join private matches with anyone on your Facebook friends list.

Check out these awesome features!
* Head-to-head two player Bloons TD
* 27 custom Battles tracks
* 22 awesome monkey towers, each with 8 powerful upgrades
* Assault Mode - manage strong defenses and send bloons directly against your opponent
* Defensive Mode - build up your income and outlast your challenger with your superior defenses
* Battle Arena Mode - Put your medallions on the line in a high stakes Assault game. Winner takes all.
* Card Battles Mode - Choose the perfect deck of tower and bloon cards to outwit and outplay your opponent
* Monkey Tower Boost - supercharge your monkey towers to fast attack for a limited time
* Bloons Boost - power up your bloons to charge your opponent in Assault mode
* Create and join private matches to challenge any of your Facebook friends
* 16 cool achievements to claim
* Customize your bloons with decals so your victory has a signature stamp

The choice of strategy is yours - hunker down for the long game, or go for the quick win with a rush of fast Bloons? Jump into a game of Bloons TD Battles now!

Bloons TD Battles ©Copyright by Gamdise Do not Reproduce. By JoJo

If you're a fan of the tower-defense genre, likely, you've already sampled the delights of the Bloons TD series. Combining some seriously satisfying tower-defense gameplay with the sort of cartoonish charm found in the Super Monkey Ball series, it has attracted countless players. As the name of this new game suggests, Bloons TD Battles takes the focus away from level after level of regular but tightly designed defensive gameplay, and zeroes in on real-world battling. A brief tutorial aside, there's no AI component to this latest Bloons game. Instead, you'll be going head to head against players from around the world.

Bloons TD Battles takes the tower defense concept espoused in the Bloons TD series and makes it into a simplified-yet-fun multiplayer variant. The gameplay is similar to that in Bloons TD 5 but two players compete against one another in one of four game modes. In Assault Mode and Battle Arena, each player normally progresses through the levels that are usually equal to 2x-1 in terms of BTD5 levels. However, players also can buy additional balloons, send them to their opponents, and overwhelm them.

In "Defense" mode, players play a natural game with the screen split vertically. Players can spend money to increase their income. In "Card Battle" mode, players can choose from a series of cards to use in their games. These cards have two functions: to send balloons to enemy players, which, like in Assault mode, gives the player sending the balloons extra income, and to drop a tower. The goal in all three game modes is to outlast your opponent in bloon attacks. Using the game's skill-based matchmaking system, players can automatically match each other.

The last mode is Club Battle, where players can play up to three of the six-game modification "cards". Card choices can be selected in advance when playing against friends in private lobbies, but are chosen randomly when playing against other opponents. Players can earn a club ticket at 7 p.m. each day, or they can earn a club ticket from the daily spins. Another mode is Versus Friends, in which players can play one of four game modes with a friend rather than a random player by entering a code from the player's private lobby.

As you move through the waves, the balloons tend to get stronger. Even after making upgrades, your current tower may not be able to keep up. When this happens, you will need more powerful towers. With this, don't hesitate to sell your existing towers. You can use the space for building new towers, and the added coins can help with purchases and upgrades. You will have access to many balloons as the game progresses, so be sure to mix them up. Don't rely on only 1-2 types of balloons when attacking. Try to mix them up to put more pressure on your opponent. You can set up multiple balloon combinations to keep your opponent off balance and guess what kind of attack you will perform.

When it comes to attacking, it's actually better to be more aggressive. If you let your opponent relax and farm, they will be more likely to earn more coins and be ready to attack. So, always be aggressive and try to keep attacking your enemies so they don't relax and farm peacefully. Putting pressure on them will usually result in your opponents being thrown off their game plan. They must constantly defend and prepare for your attacks, so they will be hard to set up.

Overall, it's a great game! Whichever mode you choose, it's a really fresh and fun experience. You still have to manage tower placement and upgrades, but it provides a little more of the simple fun that other games in the series have delivered so consistently. Bloons TD Battles likely isn't what purist fans of the series would have asked for, but at this stage in the franchise's life, it's probably time for something other than more of the same. If you like tower defense games, I highly recommend you try it!