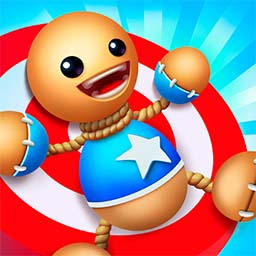 Whether you are bored or want to blow off some steam, this fantastic action game lets you slap the doll silly. Do it a couple of times and you will surely forget about your anger. Or if you want to inflict more damage, you can use high-powered automatic rifles or devastating rocket launchers. And for maximum impact, launch the nuclear bomb and create devastating blasts.

Maybe you just want to beat the raggedy doll a little. Perhaps a few bumps on its head and you feel good already. Or probably a good bashing and smashing will do you right. A good kick to the head perhaps. Or you can decimate it with a nuclear bomb and erase it off the face of the planet. The choice is yours in the Kick The Buddy game.

Explode, destroy, fire, shoot, smash, freeze, toss, send the power of the Gods and don't even think about stopping. You now have a virtually limitless arsenal to beat: rockets, grenades, automatic rifles, and even a nuclear bomb!

➤ Get to beat, bash, and slap a ragdoll to your heart’s content.

➤ Earn more if you have better weapons to hit it.

➤ From time to time, make sure to upgrade your weapons

Even if you're a relatively stress-free person you need to chill out at some point in stress games like this.

Kick the Buddy ©Copyright by Gamdise Do not Reproduce. By JoJo

Buddy appears to be a brown doll with some parts that are also blue. The torso area has a large blue area surrounded by a white star with a blue outline, most likely representing a shirt. The shirt area appears to be sewn to the lower part of the torso, and each arm has a blue section sewn to another part, supporting the idea that Buddy has a shirt. Each limb, including the head, is joined together by cords, but these cords seem to be infinitely stretchable. Buddy's eyes appear to have black plastic beads that look shiny. Buddy has a human-like mouth but appears to have no lips.

He lives in a box and the point of the game is to defeat him until he is eliminated. There are no game levels, all you have to do is attack a broken doll all the time and do as much damage to it. Each hit on him will earn coins, and as the game progresses, you can use the coins earned to buy new missions or upgrade your weapons. Hit him with a more advanced weapon to get more coins. From knives and pistols, you can go farther, and as the level progresses you can choose from highly advanced weapon systems. Choose from submachine guns or hand grenades for devastating results. You can even jump on a battle droid and blow that raggedy doll to kingdom come.

Buddy's face will change depending on how the player treats him. Buddy may be left with bruises and bandages from the beating. However, they slowly walk away. Buddy can be stretched by tapping and holding his 2 limbs. Whenever the player stretches him, he will yell at the player not to stretch him. Buddy has different reactions depending on what is happening. If you choose a dangerous item, Buddy will want you not to use it. If you choose a food item, Buddy will want it. The cartoon-like graphics also help keep the app fun without making it creepy or extremely violent, which would be a definite problem if it looked more realistic.

Another thing that truly adds to the great humor of the game is the fact that you can take a picture of your friend's face from any photo on your phone and place it on the doll itself. You no longer need to dream about what it would be like to stuff your friend into a giant toaster because now you have Kick the Buddy to help you out! It is a great stress reliever and allows you to release pent-up energy. If you're looking for a fun way to spend your time, then the Kick the Buddy app is where you should go.